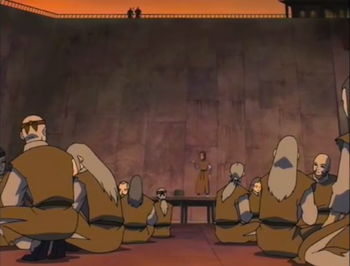 Katara tries to convince the Earthbenders to fight back.
"We can't abandon these people. There has to be a way to help them."
— Katara
Advertisement:

Our heroes befriend a young earthbender named Haru. However, Haru has to train in secret, as his village is under the control of the Fire Nation, who have outlawed earthbending for fear of a rebellion. The gang encourages him to improve his skills; however, he is found out, and taken by the Fire Nation into slavery. Katara pretends to be an earthbender in hopes to orchestrate a rescue, and she, with back-up from Aang and Sokka, must somehow get the imprisoned to help themselves.

The Gaang tries to act natural when the Fire Nation walks in on them.

The Gaang tries to act natural when the Fire Nation walks in on them.