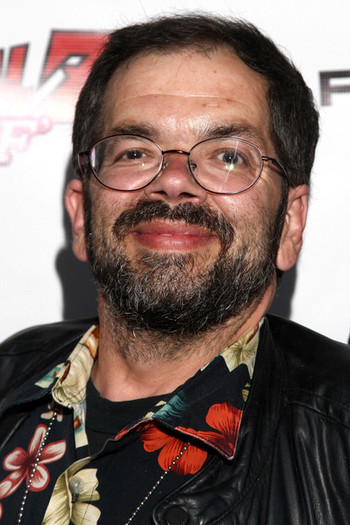 Christopher Owen Ayres (May 16, 1965 – October 18, 2021) was an American voice actor who worked with Funimation, OkraTron5000, New Generation Pictures and formerly ADV Films and Seraphim Digital Studios. He provided voices for a number of English-language versions of Japanese anime films. He also had lots of experience as a stage combat director, which he sometimes combined with his anime experience in the form of his "Mock Combat for Cosplay" con workshop panel. He was best known at conventions for bringing a giant colorful travel mug nicknamed by fans as "The Sippy Cup of Doom".

In 2017, Chris was rushed to a local hospital in Houston and diagnosed with "End Stage C.O.P.D." which would require multiple surgeries, including a double lung transplant. An online fundraiser

was held through YouCaring to help cover the expenses, and the $25K goal was not only met by fans, but exceeded by more than an extra 50%. While he regained enough strength to return to his work as Frieza for Dragon Ball Super: Broly, anxiety remained that the available donor organs wouldn't become available in time. His fans and the whole cast and crew of DB would continue to support him and hope for his recovery (with Christopher Sabat on record

as saying that the crew was ready for word to come in that Ayres' transplant was ready to go and for him to depart mid-recording session if need be).

in the company of his family and loved ones. May he rest in peace.

He was the brother of Greg Ayres. Occasionally his surname is listed as Ayers instead of Ayres; however, this spelling is incorrect as his legal name was "Christopher Ayres".