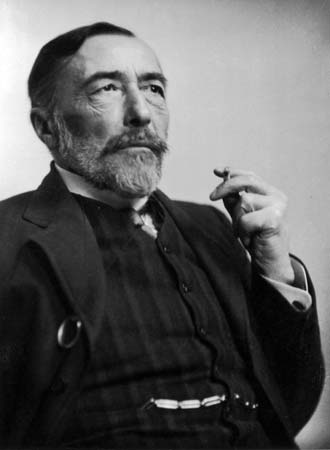 An ethnic Pole (see Poland), but born within the dominions of what was then the Russian Empire (actually present-day Ukraine, but see also Russia), Conrad lived an early life upset by considerable political turmoil. He eventually settled in England, finding work as a merchant sailor (and even becoming The Captain of his own ship) before turning to writing.

A polyglot who spoke Polish and French from childhood, Conrad eventually made the rare transition of writing solely in English, despite it being a "third language" at best. He became fluent only in his teenage years and for the rest of his life, he spoke English with a pronounced accent, anticipating the more radical transitions made by the likes of Vladimir Nabokov and Samuel Beckett.note Nabokov disagreed. "I differ from Joseph Conradically," he argued, noting that Conrad only ever wrote books in English, which was less of a transition than Nabokov who went from writing novels in Russian to novels in English, being accomplished in both languages.

Conrad’s youth as a merchant sailor on French and British vessels provides the background for most of his seafaring works. Most of his time at sea was working trade routes around Africa and India at the height of The British Empire, which informs most of his other works. In his lifetime, he was regarded as a great talent by the likes of Henry James, Rudyard Kipling and he later influenced artists like Graham Greene, T. S. Eliot, Orson Welles, Thomas Pynchon, Ernest Hemingway and F. Scott Fitzgerald.

Several of his books have been adapted to films. Most notable examples are Sabotage (1936) by Alfred Hitchcock which adapts The Secret Agent note Not to be confused by the Hitchcock film Secret Agent which adapts W. Somerset Maugham's Ashenden, Carol Reed's adaptation of An Outcast on the Islands and Richard Brooks' adaptation of Lord Jim. The most famous one of course is Apocalypse Now which adapts his 1899 novella Heart of Darkness through Setting Update from the Belgian Congo to the Vietnam War. Likewise, David Lean planned to adapt Nostromo for his last film but he died before production began. In addition, numerous ships in Alien are named after elements of Conrad's book, including the Nostromo and its shuttle Narcissus, and later the Sulaco, after the town in Nostromo.

For reasons such as this, Conrad is perennially part of School Study Media as well as a popular author to this day.

Novels by Joseph Conrad include:

Other works by Joseph Conrad contain examples of:

Trivia tropes that apply to him: