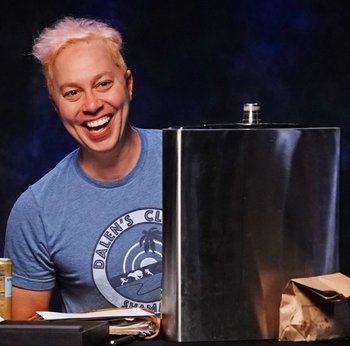 , is a voice actor, writer and director who has worked on both 4Kids Entertainment dubs and too many California dubs to list, as well as video games, original animation series and on-camera roles. He is often typecast as a Muggle or one of Those Two Guys, but when he's not, he'll probably be a hammy antagonist.

He is one of the hosts of Geek Pad, part of the ComedyComedy channel

on YouTube. He has been nominated for a 2009 Daytime Emmy for his writing on Imaginary Bitches, and then later won one in 2018 for his directing on Danger & Eggs. He also started a podcast, "Allworknoplay

", with fellow voice actor Liam O'Brien. He is one of the nerdy-ass voice actors starring weekly in the Dungeons & Dragons stream Critical Role.

You are not going to spell his name right on the first try.

He's the older brother of Eden Riegel; a live-action actress who in the recent years entered the voice acting business.

The one whose life is already ruined... is you!! No alibi, no justice, no dreams, no hope! It's time to get a life and therapy! TAKE THAT!

Have no fear, tropers! Under my leadership, life enhancement is assured!