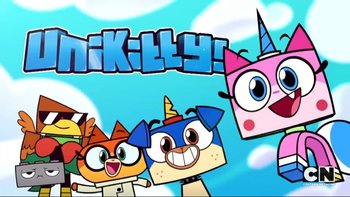 "Hieeeee! I am Princess Unikitty, and my new friends and I welcome you all to my new spin-off show!" note (From left to right: Richard, Hawkodile, Dr. Fox, Puppycorn, Unikitty)
Advertisement:

The show takes place in Unikingdom, a bright and cheery land ruled with an iron marshmallow by Princess Unikitty. As Unikingdom's reigning monarch, it is her royal duty to make sure every single day is the happiest and most creative and fun day ever, a duty she takes very seriously. Helping her in her never-ending quest are her four faithful friends: Puppycorn, her little brother; Dr. Fox, the kingdom scientist; Hawkodile, her royal bodyguard; and Richard, her trusted advisor and castle caretaker. Together, they share Unikitty's mission to keep the people of Unikingdom smiling, and have fun and learn life lessons while doing so.

But not everyone in Unikingdom is a fan of Unikitty, surprisingly enough. In neighbouring Frowntown lives the bullying villain Master Frown, who has his own agenda: Ruin Unikitty's day, by any means necessary.

Instead of Alison Brie reprising her role, Tara Strong voices Unikitty here. Joining her are Grey DeLisle as Puppycorn, Kate Micucci as Dr. Fox, Roger Craig Smith as both Hawkodile and Richard, and the Score Keeper and Eric Bauza as Master Frown. The theme song is performed by BABYMETAL. The show's animation is provided by Snipple Animation, known for their work on Be Cool, Scooby-Doo! and Bunnicula, and by Renegade Animation, known for The Tom and Jerry Show and The Mr. Men Show.

Oooooohhhhhh, what beautiful tro-ohh-opes! They're full of sunshine!

Puppycorn waiting at a "wishing" well.

Puppycorn waiting at a "wishing" well.