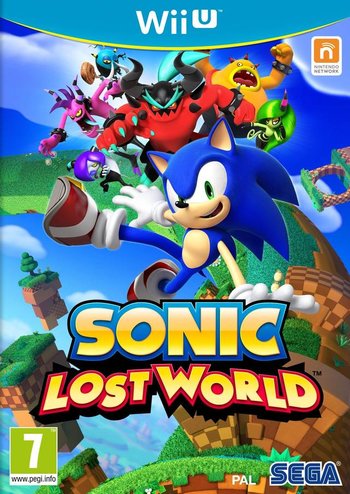 Rise against the Deadly Six!
Advertisement:

Sonic Lost World is a Platform Game from the Sonic the Hedgehog series for the Wii U and Nintendo 3DS as part of a partnership deal with Sega and Nintendo. A PC port of the Wii U version was also released in November 2015.

Mad scientist Dr. Eggman has a new plan to Take Over the World: harnessing the power of an ancient artifact to control a team of six super-powered demons collectively known as the "Deadly Six". When Sonic the Hedgehog attempts to foil his plan by getting rid of the aforementioned artifact, the Deadly Six immediately use their new-found freedom to backstab their former master and embark on a rampage that threatens to destroy the world of "Lost Hex". Now Sonic must team up with Eggman to take down the Deadly Six before everything and everyone is lost to their villainous schemes.

The game marks the first (and only) entry in the main game series written by western writers Ken Pontac and Warren Graff. They previously worked as localization writers for Sonic Colors.

The 3DS version is also notably the first fully 3D Sonic game on a handheld, as well as the last Sonic game made by Dimps, ending a 12-year history with the franchise that dates back to the Game Boy Advance.

You can view the Wii U trailer here

As long as I can still strangle a Zeti, these tropes are fine: