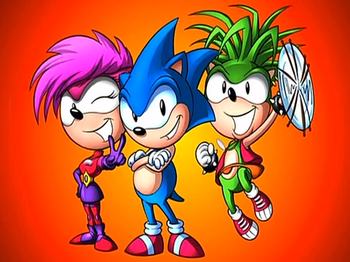 They made a vow - their mother will be found!
Triplets born, the throne awaits!
A seer warns of a deadly fate!
Give up your children, separate,
Bide your time, lie in wait!
—The opening lyrics to the theme song
Advertisement:

Sonic Underground is the third Sonic Animated Adaptation made. It was produced by DIC Entertainment.

Sonic and his two siblings, Sonia and Manic, are left by Queen Aleena as Doorstop Babies to families, each of a different class. Eventually, they meet together when grown up, and guided by the Oracle of Delphius, they set out to thwart Robotnik, find their mother, and form the Council of Four to end his reign. Robotnik also banned all music, and our three protagonists were Musical Assassins with The Power of Rock. Each episode's climax would generally be a song performed by the triplets, often with An Aesop based on the events of the episode. This series is also the first western Sonic cartoon to introduce Knuckles.

Syndicated in the United States in the Fall of 1999, as part of the BKN children's block, with repeats continuing until the end of Summer 2000. BKN also syndicated and co-produced earlier DiC Sonic series Adventures of Sonic the Hedgehog, when it was known as Bohbot Entertainment (unlike Adventures, however, Bohbot only distributed Underground). Nationally, the show aired (along with other BKN programming) on Kids' WB! via The WB's 100+ Station Group, airing only in markets that were too small for a WB or independent affiliate to operate.

Not to be confused with the three other western animated series based on Sonic the Hedgehog, the anime series Sonic X, the OVA Sonic the Hedgehog: The Movie, the film adaptation or the game that helped to kill it off that same year, Sonic Adventure.

After ten years of being Cut Short, it seemed that the story would conclude

in the Archie's Sonic Universe comic. Unfortunately, the project was cancelled.

The Fan Web Comic Archie Sonic Online has, however, decided to give their own spin on this.