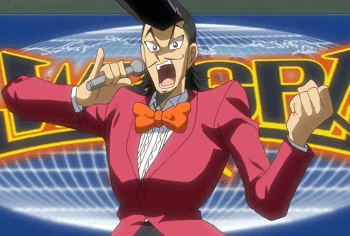 Looks like your audience needs some convincing that things are awesome, and that's where the announcers come in. Adding a classic sports play-by-play or color-commentary announcer, or a movie trailer-type announcer is an easy way to make anything more dramatic, more exciting, more thrilling. Large Ham announcers are particularly effective. For a variant, rather than one of the loud announcer styles, you can go with the whispering golf-announcer style instead.

See also In a World... For being applied to works of fiction, see Lemony Narrator. In video games, this is particularly common in Competitive Multiplayer, with the announcer belting out the Idiosyncratic Combo Levels as the player racks up a Kill Streak. May overlap with Cuckoolander Commentator. Compare Large Ham Radio and the Hammy Herald.