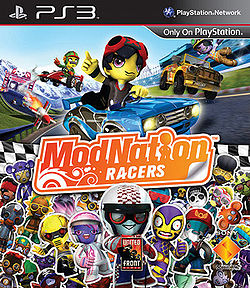 And this isn't even half the stuff you can make.
Advertisement:

In a brief pitch, the equation tends to be Mario Kart + LittleBigPlanet, a Mascot Racer game that takes the realistic yet fun driving system and doubling it up with the ability to create tracks, Mods (the Drivers) and Karts, each and every one of those goes more in depth than TrackMania even, and adds so much to the driving aspect to hold up on its own.

This game was announced at E3 2009 and released on May 21st, 2010 in Europe and May 25th in the United States for both the Playstation Portable and Playstation 3. Later, a PlayStation Vita sequel subtitled Road Trip was released in early 2012, which is missing the career mode cutscenes and online from the original game. As with many classic PlayStation 3 titles, the servers were eventually shut down on October 10th, 2018, bringing the game's much vaunted online features to an end.