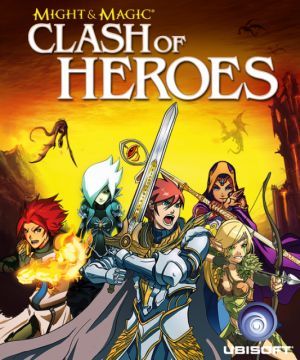 Might and Magic: Clash of Heroes is a RPG/Puzzle hybrid in the same vein as Puzzle Quest. Set 40 years prior to Heroes Of Might And Magic V, during the War of the Blood Moon, the game tells the story of 5 children from different families that were tasked to guard the Blade of Binding, a powerful artifact able to control demons. After a meeting is attacked by demons, the five end up in different parts of Ashan.
Advertisement:

Battles are fought by means of a puzzle interface with units of three different colors that have to be matched up vertically to form attacks or horizontally to form walls. Some units take up two or four spaces (called Elite and Champion units, respectively) and need to be matched up with smaller units of the same color to form attacks, usually with a special ability like being able to jump over walls or delaying enemy attacks.

5 of the original 6 races appear with slight changes to their lineup, and also have different kinds of walls. Two heroes per faction bring in their unique spells and can be equipped with a variety of artifacts to further customize them. The lineup ranges from Godric and Findan, who also played major roles in Heroes V, to complete newcomers like the Knight Varkas and Godric's brother Aidan.

The following tropes appear in this game: