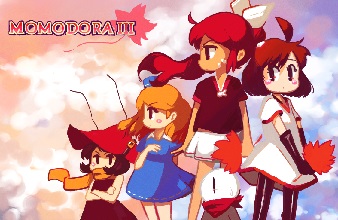 In the land of Koho, common are the sacrifices of maidens,
in hope of recreating the world as a better place to live.

Not all accept the rituals, though.
An orphan girl, who has lost her mother to these rituals,
entered a forbidden land, in search of a particular item.

The legends say that this sacred item can even
bring the dead back to life, but for a certain price...
Advertisement:

is a 2010 PC Platform Game about Isadora Doraline, a maiden who explores a set of caves belonging to the Underworld Queen Lamia in search of a way to bring her mother, who was sacrificed to recreate the world, back to life. Initially grasping only a green magic leaf as a weapon, Isadora quickly finds weapons, one-eyed enemies, and treasures strewn about. The game, as the developer puts it, is inspired by other classics such as Mega Man, Metal Slug, Cave Story, and Zelda. It is tough, too: Isadora can take only five hits before dying and she can only refill health at save crystals between each level.

The 2011 sequel, Momodora II, puts the player in control of another maiden, Momo, who is tasked with slaying the new Underworld Queen, who is attacking her world. The game is notable for opening up into a metroidvania, with new abilities aiding Momo as she progresses past KoHo Plains in search of the new queen.

Momodora III, which was released on itch.io and Steam in 2014, features both Momo and Isadora as playable characters, travelling towards Hell to defeat the Death Goddess Rell, the one responsible for the creatures who have been terrorizing their village. The game has 6 linear levels rather than being a metroidvania, but the player can warp back to cleared levels and there's plenty of hidden items that can be equipped for special effects.

A fourth game named Momodora: Reverie Under the Moonlight was released in March 2016 for PC, and became the first instalment in the series to be ported to home consoles: PS4 and Xbox One in 2017, Nintendo Switch in 2019. Featuring a metroidvania set-up once more, it is a prequel about Kaho, a priestess who's on a quest to cleanse the corruption coming from the kingdom of Karst. It has an account at Patreon

A fifth game in 3D was once in development, but it was cancelled in favor of

2019's Minoria, a Spiritual Successor to Reverie Under the Moonlight. In 2021, a 2D entry called Momodora: Moonlit Farewell was then announced as the final one in the series. Trailer