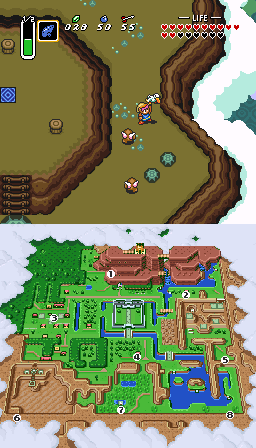 A creature, item or ability in a video game which enables fast travel between a set of fixed points in an open-world setting. In a lot of games, these points are marked by a special monument or landmark to designate them as such. This cuts down on potentially annoying backtracking and allows the player to save time getting back to areas of interest. In some cases, using the Warp Whistle is the only way to reach certain areas.

Travel can be limited to between these set of fixed points, or to those points from anywhere in the game world. In most cases, destinations only become unlocked after the player visits them the old-fashioned way first. This limitation is sometimes justified by having you do something like opening a portal or activating a teleport machine when you get there, allowing you to get back there easily. Most of the time, however, it's never explained why the traveling method only works if you have been there already. It's often explained from a gameplay standpoint, since if you could teleport to anywhere in the world from the beginning of the game, you would never have to overcome any of the obstacles the game designers put between you and your destination and the REAL reason for the Warp Whistle is so you don't have to do it again every time you want to visit an area.

There is sometimes a monetary charge for the trip, especially if the warp whistle takes the form of a paid service like an airport or subway.

Compare and contrast Global Airship. While the Global Airship has wide-ranging freedom of movement, the Warp Whistle has very fixed destinations, more of which become unlocked in play, but it is generally available at an early point. You can generally only warp back to areas you've been to or, in the case of Crow's Nest Cartography, specific towers you've climbed. A helpful real-life comparison: The airship is a private helicopter, and the Warp Whistle is a subway pass.

If the Warp Whistle is available as an item, it may be restricted to usage in "overworld" locations only (outdoor settings like towns or the world map), and fail to work if the player attempts to use it in an enclosed area such as a cave or dungeon. Its in-dungeon counterpart would be the Escape Rope, whose function is limited to teleporting the player out of the dungeon in question (after which, the player may use the Warp Whistle properly).

Often overlaps with Point-and-Click Map, in that a Warp Whistle may call up such map (instead of showing a list of known locations) but is not always required to access it. Often veers into Acceptable Breaks from Reality depending on context - some games justify the "Warp whistle" mechanic while others just ignore it for the sake of making it an anti-frustration feature.

Mario uses a fax machine to travel between the Sensor Lab and its satellite offices.

Mario uses a fax machine to travel between the Sensor Lab and its satellite offices.