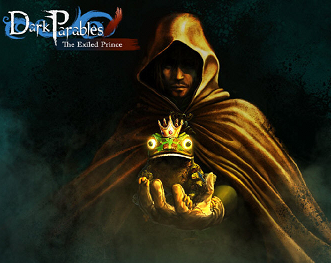 These aren't the bedtime stories you remember...
Advertisement:

The Dark Parables are a series of hidden object games (or, more accurately, fragmented object games) inspired by classic fairy tales. Produced originally by Blue Tea Games and later by Eipix Entertainment, and distributed by Big Fish, the games feature a nameless detective who specializes in solving mysteries connected with those fairy tales.

The games in the series
In addition to the main series, Blue Tea Games has released a Freemium game for iOS devices called Fable Age. The player controls a team of four fairy tale characters in a turn-based strategy RPG of Elemental Rock–Paper–Scissors, which progresses through 23 "books" on a quest to rescue King Arthur. While not directly part of the Dark Parables canon, it is loosely connected. Curse of Briar Rose and The Exiled Prince are two of the books through which the player must battle, featuring artwork from the corresponding Dark Parables games on their covers, and Princess Briar Rose and the titular Exiled Prince may join the team as Optional Party Members during parts of their respective quests.
Advertisement:

Once upon a time, there were many, many tropes:

open/close all folders
Tropes present throughout the series

Tropes so magical they keep appearing:

Ruth of the Red Riding Hood
The Final Cinderella

Katherine, The Final Cinderella
Jack and the Sky Kingdom

Rapunzel, The Princess of Floralia
The Little Mermaid and the Purple Tide

Althea, The Mermaid Princess
The Queen of Sands

Mab, The Keeper of Dreams
Goldilocks and the Fallen Star

Leda, The Enchanted Goldilocks
The Swan Princess and the Dire Tree

Elise, The Swan Princess
The Thief and the Tinderbox

Gerda, The Golden Child
Requiem for the Forgotten Shadow

Guida, The Candle Maker's Cat
Return of the Salt Princess

Brigid, The Princess of the Grak Kingdom
The Match Girl's Lost Paradise

Frau Holle, The Forest Witch
Portrait of the Stained Princess

And they all lived happily ever after... maybe.