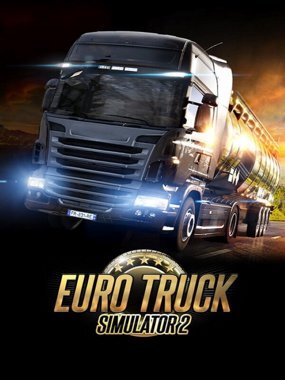 Euro Truck Simulator is a Simulation Game in which you drive trucks in Europe. Developed and published by SCS Software, two installments of the series exist so far: The original, released in 2008, and its 2012 sequel, Euro Truck Simulator 2, which is the "official" and current installment of the series, adding improved graphics, official truck licenses, and RPG Elements. Though either dismissed as Fun for Some or enjoyed ironically through Mundane Made Awesome Major League Gaming parody videos and drunken livestreams by most gamers, Euro Truck Simulator 2 has received consistent critical praise such that it has been in continuous content development for a decade as of 2022, with many reviews upholding the game as a real-life Lethal Joke Item: an addictive and deep driving game which will reward players who do not immediately dismiss it as yet another simulation game with a mundane premise.

It has a coffee-swilling cousin over the Atlantic known as American Truck Simulator. Not unexpectedly, this sequel is the one that takes place in the United States of America. Along with replacing the cab-over trucks found in Europe with American conventional trucks, it also introduced weigh stations to the series, because America has weigh stations.

Do not confuse with Big Rigs: Over the Road Racing, a much lazier attempt to depict rigs in video games. Or Big Mutha Truckers, a more fantastic take on the Big Badass Rig in video games.

Euro Truck Simulator and its sequels provide examples of: