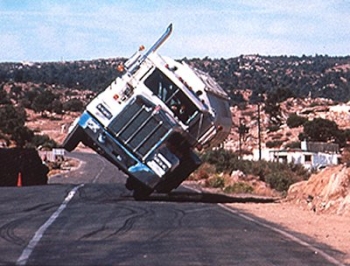 Want to show off a sweet stunt in your car?

this maneuver is like a wheelie, except instead of balancing on two front or rear wheels, the motor vehicle balances on all the wheels on either the driver's side or passenger's side. Skiing may be assisted with a ramp or by letting some air out of the ground tires. The driver will often be forced to drive in a straight line due to having to balance the car by steering.

It can be used to cruise through tight spots, pull off impossible parking stunts, or just show how skilled the driver is. The higher the risk of falling over, the better. Bonus points for pulling off the maneuver in a cumbersome vehicle like a truck.

Truth in Television! However, since Reality Is Unrealistic, the average audience may not know that this is an actual maneuver and dismiss it as Hollywood physics. Still, Don't Try This at Home.