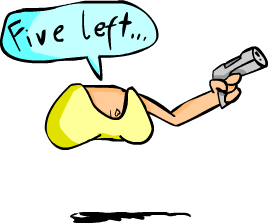 Anne from Jurassic Park: Trespasser, or what little you can see of her at least.
"And a nagging fear began to creep up in his mind. Questions that had been there all along; he just hadn't noticed them yet. For example, why couldn't he see his feet when he looked down?"
— The Narrator, The Stanley Parable
Advertisement:

In many First-Person Shooters you might notice that something odd about your character: you don't seem to have much in the way of a bodily presence. Instead of feeling like you're actually there, in the game, you almost feel instead like you're simply controlling a flying RC helicopter with a camera attached to it, or driving a robot on tank treads that has a two-way TV screen for a face.

For example, you see your arms holding the gun in front of you, but everything else about your body seems non-existent. Looking down, you don't see your torso or legs. Rather, your whole body seems to rotate with your view, making it look like you're not touching the ground at all. Further, you seem to have a curious lack of interaction with the environment: water is undisturbed by your steps, and walking through snow/mud leaves no footprints. You don't cast a shadow, even if NPCs do. You never see yourself in any mirrors or reflective surfaces. Walking up to a door, when you press the "open" button on the controller, nothing seems to happen in-game; the door just magically opens up. For the most part, it seems like the player might as well be a ghost.

This is because, from a technical perspective, you are. The game engine is built so that you are essentially just flying a camera around, with animated arms being "painted" on the screen that only you can see. As far as the game engine is concerned, the player's viewpoint is just a camera. In some cases, the player's physical body might never actually be modeled or tracked in-game.

In early games, this was considered an Acceptable Breaks from Reality, as rendering something that wasn't in view the majority of the time would be a waste of limited hardware resources. Also, many older raycasting engines had to purposefully limit vertical camera rotation to well under ±45° in order to minimize perspective distortion artifacts. However, as hardware has become more powerful and software more sophisticated, this trope can become particularly jarring. Often, even games that have the option of first-person and third-person views, like the 3D The Elder Scrolls and Fallout games, will render the player character model in third-person but have it disappear in first-person.

Another reason is that most GPUs and graphics APIs tend to clip geometry that's closer to the edge of the screen, hence the reason why in most cases using the same third-person model for a first-person camera would result in visual artifacts.

Modders who write first-person camera hacks for third-person games such as Grand Theft Auto would disable the head model to keep it from displaying stray polygons or getting in the way of the camera.

Also, the reason for using a separate view model is that animations and weapon or item positions on a third-person model tend to look jittery or awkward when viewed on a first-person camera, as well as so that models that are close to or held by the player, eg. guns, can be given more detail. The latter also goes with racing simulators which use separate, more intricately detailed interior models whenever a cockpit camera is used; the interior on a third-person car model is usually of lower quality, or in some cases do not exist at all (especially with early racing games where the first-person "interior" is just a two-dimensional sprite).

To combat this, some FPS games have begun to include more and more model parts of your body. For example, if you go to open a door, you'll actually see an animation of a hand reaching out and turning the handle. You sometimes will also see your body in cutscenes, such as if the player is knocked down by an explosion and you briefly see your legs as you're bodily thrown back. However, as soon as the cutscene is over, and you have control of your character once again, you'll find your legs mysteriously absent once more. As a consequence this trope is rather less jarring if used in conjunction with Unbroken First-Person Perspective, as at least the third-person cutscenes don't remind players of its presence.

See also Invisible Anatomy. If there is a model, but it lacks a full set of animations, see Model Dissonance.