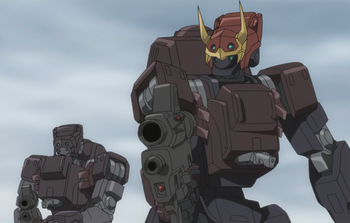 Take a wild guess which one belongs to the main character.
"I customized that bike for myself. It's too wild, you couldn't handle it."
—Shotaro Kaneda, AKIRA
Advertisement:

An Ace Custom is a piece of technology — a Humongous Mecha, Space Fighter, a particular weapon, or similar — which differs from the normal model because it has tweaks in order to better fit its user. The users are typically Ace Pilots, and their equipment is customized to their specifications — thus, ace custom. The extensiveness of this customization varies widely, from simply giving it a new paint job or Nose Art to actually having a completely unique machine built from scratch. Closely related to the Super Prototype, an ace custom will usually be significantly more powerful than a standard model.

Normally, ace customs reflect their user's combat style — a pilot preferring high-speed combat will boost their engine output or add additional thrusters, a gunslinger with Improbable Aiming Skills will add a big gun with scopes and bipods for increased accuracy, etc. This may allow them to be Weak, but Skilled, if their equipment doesn't have as much raw power as their opponent's, but it's so tuned to their strengths that they can compete anyway. It may become so much so that it becomes a case of Only I Can Make It Go. It can also be a case of being a Full-Potential Upgrade, if the customizing is required to make the user more effective.

Usually it is mentioned the that such modifications, while ostensibly improvements, would add too much cost and complication to mass produce while the Ace is much less inclined to care about such things. May still be shown to have suffered on reliability or simply be considered unsafe if they're regularly pushing design limits.

Everyone else just has to settle for the Vanilla Edition or Mook Mobile.

If an Ace Custom was made commercially-available, it'll become a Limited Special Collector's Ultimate Edition.