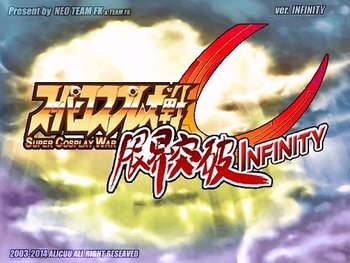 Super Cosplay War Ultra is a doujin fighting game released by "Team FK" for the PC. Since 2004, it's undergone numerous updates with new characters, game modes and stages. The current edtion is "~Infinity~" (無限大 or "GENKAI TOPPA"), released near the end of 2014. In a nutshell, think of Pocket Fighter, but with the fanservice (not that sort of fanservice) taken Up to Eleven.

Some time ago in a place called "FK City", a mysterious explosion happened and there was a chemical leak. Citizens got sick from it, but since everyone got better, the incident was Hand Waved... that is, until a bunch of them received the supernatural ability to transform into characters and elements from various anime, manga, films and video games and began using these powers as "Super Cosplayers (SCs)". But, like with any god-given powers, some of them decided to use it out of selfishness, creating the anti-government group "The BR". The military couldn't stand a chance against the super powered individuals; luckily, some SCs fought alongside the government and managed to stop The BR.

The characters (and the series they cosplay) include:

The team behind this game would later go on to make Chaos Code. Unsurprisingly, that game contains a few references to this one.