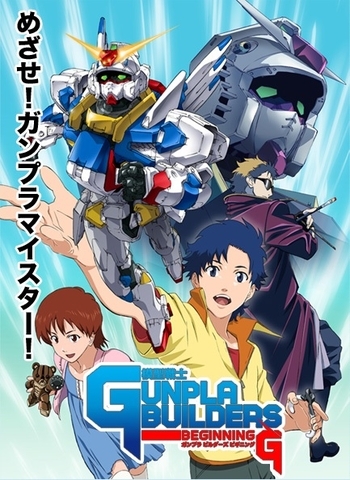 Gundam has always been about war, what causes it, and human evolution. But it has also been about model kits. In Model Suit Gunpla Builders Beginning G, war is completely ignored and the models become the focus; celebrating thirty years worth of plastic kit building.

The story starts when Haru Irei goes to see the Odaiba Gundam with his father. When he decides he wants to build a model kit, he fails to pick up the last RX-78 and instead stumbles upon a rare model kit, the Beginning Gundam. Upon completing it, he starts to play in the Gunpla Battle video game where his model is scanned into a computer so he can actually pilot it against other model kits. In one of these battles he meets the mysterious Boris Schauer, who shows him how deep the world of Gunpla can get.

The series is a three episode OVA of episodes consisting of fifteen minutes each. It can either be seen as a crass marketing ploy that cuts out the War Is Hell middleman or a cute little show about the culture that has kept Gundam going for thirty years - which seeing as its meant to celebrate the models - not the series, the latter would the optimal mindset to enjoy it. Either way you can view it online here

Now has a Defictionalization in the video game Gundam Breaker for the Playstation 3 and Playstation Vita, which serves the OVA's purpose in Video Game form, as well as a Spiritual Successor in the anime series Gundam Build Fighters which expands the idea even further.