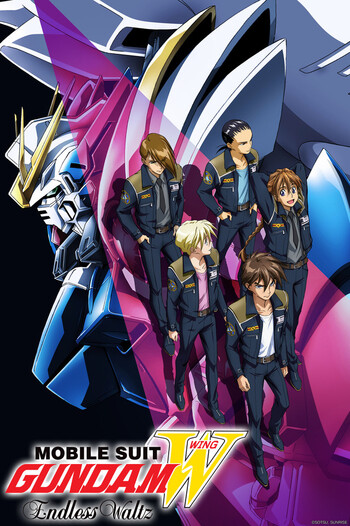 History is much like an endless waltz. The three beats of war, peace, and revolution continue on forever. However, history will change upon the day of my coronation.
— Mariemaia Khushrenada
Advertisement:

At first a 3-part OVA before receiving a full theatrical release, Endless Waltz concluded the Mobile Suit Gundam Wing storyline until the release of Frozen Teardrop.

In the year After Colony 196, the "Eve Wars" (the conflict between Earth and the Colonies) have ended, and both Treize Khushrenada and OZ have passed from existence. The Earth Sphere Unified Nation (ESUN), and a special peacekeeping police force known as the Preventers, rose from the ashes of OZ. Since they figure they will no longer have a role in the post-war era, four of the five Gundam pilots (with Wufei as the lone holdout) put their Gundams on a giant disposal satellite headed for the sun. Peace reigns supreme on Earth and in space.

This peace would not last, though: on the anniversary of the Eve Wars' end, a rebellion occurs on newly-completed colony L3 X-18999. The rebellion, led by seven-year-old Mariemaia Khushrenada (who reveals herself to be Treize's daughter), kidnaps Relena Darlian (now the Vice Foreign Minister of the ESUN) during a diplomatic visit to the colony. As the Gundam pilots investigate further, they discover that Mariemaia's grandfather — Dekim Barton, a former adviser to martyred colony leader Heero Yuy — really controls the rebellion. Dekim plans to use X-18999 to go through with the "original" Operation Meteor note crashing the colony into Earth and letting the Gundam pilots take control in the chaos if the ESUN doesn't comply with his demands.

The Gundam pilots must prevent Dekim from seizing power over the ESUN, but two things complicate matters: the pilots don't have their Gundams, and the only one that does — Wufei — has defected to Dekim's side.