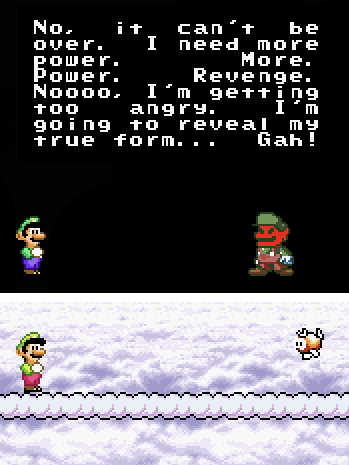 Gnarl: Yeah, but don't forget: I can transform into the Gnarlborg!
[beat panel]
Gnarl: Well, I can...
Radd: Does it ever help?
— Kid Radd
Advertisement:

The villain (perhaps after already going into another One-Winged Angel form and still losing to the heroes) shape shifts into an ultimate Super Mode. So awe-inspiring is this new form the very skies weep blood, so terrifying that it combines the power of every monster, and the hero and his love kiss each other goodbye.

Problem is, the new super form is a joke. This can be for a number of reasons, be it an unstable Power Source, some built-up side effects, incompatible Power Upgrading Deformities, or a "plain old" Super-Power Meltdown once the heroes poke him.

Much like a Fake Ultimate Mook, this boss goes down in three hits and goes into a Shapeshifter Swan Song and promptly keels over in an explosion of energy or guts. Hopefully not both. Hell, hopefully neither!

Usually, this is a subversion of One-Winged Angel by making the enemy an Anti-Climax Boss, or it may have just been that the writers designed a monster form without a corresponding battle. Can be played for either pathos or comedy.

This is an Ending Trope. Spoilers Ahoy.

His transformation is actually incomplete. Because he got the wrong sacrifice, he wasn't able to absorb all seven World Rings.

His transformation is actually incomplete. Because he got the wrong sacrifice, he wasn't able to absorb all seven World Rings.