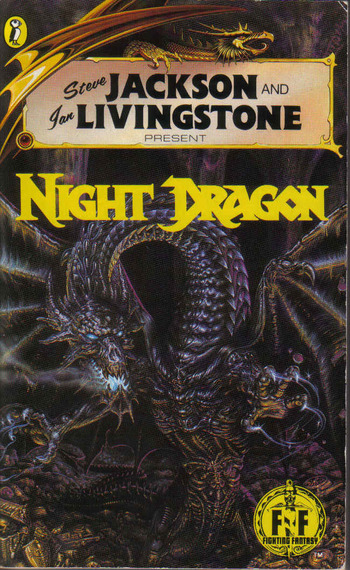 Night Dragon is the 52nd entry of the Fighting Fantasy series of gamebooks, written by Keith Martin.

You are an adventurer, contacted by a mysterious person in Hemlock Inn in Port Blacksand. Said person, revealed to be a Dark Elf, informs you that an eldritch terror from an unfathomable past is growing stronger with each passing day somewhere in the frozen wasteland of the Dragon Reaches: the legendary and feared Night Dragon, an Ancient Dragon who scares even the Dragons themselves, is recovering its power and preparing to unleash it on the world of Titan, and the Conclave of Dragons is unable to offer help against the terrible creature. Only a chosen hero, wielding the legendary Sword, Shield and Armor can hope to descend into the infernal lair of evil and slay this fearsome opponent. And so, believing the words of this dying Elf, you head northwards to start a long and perilous journey, facing the forces of Chaos who allied themselves with this ancient horror and put an end to the Night Dragon and its army of Stalkers before it's too late for Allansia and Titan.

Night Dragon plays overall like Martin's previous adventure but on a much bigger scale, as you explore mountains, dungeons and cities alike in your quest to find the required items to help you infiltrate the final Dungeon and destroy the Night Dragon, often featuring a lot of combat, much more than in Martin's previous titles. It also adds many additional scores to keep note of, namely Honour (gained from acting selflessly and helping people), Nemesis (gained by being spotted too much by the enemy, causes more enemies to find you) and Time, which influences the difficulty of the final battle. It also has notes about Poison-using enemies, several items that come with a special code to be used, making it overall more difficult compared to previous titles from Martin.