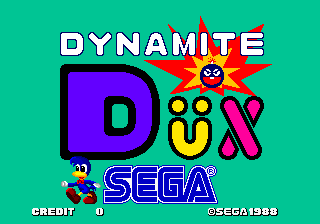 Umlaut optional.
one day, lucy was playing with her pets bin and pin in a beautiful flower garden.
then suddenly an evil black shadow appeared and changed into "achacha the great" while they were watching.
lucy startled and frightened was kept in a miracle ball and taken away to the achacha world by "achacha the great"!
therefore bin and pin rose up and ventured into the achacha world to rescue her.
Advertisement:

Dynamite Dux is a Beat 'em Up game made by Sega for the arcades in 1988 and later ported to a handful of other systems.

Like many games in the genre, there isn't much in the way of story - an evil sorcerer named Achacha kidnaps a girl named Lucy, and her two pet ducks Bin and Pin step into a portal to rescue her. What follows is a five-stage romp through several different locales and several types of wacky enemies.

One of the most interesting parts of the game is the sheer cartooniness of it - the characters are designed in a Tex Avery-like style, and every enemy has a comical death animation (which is sadly missing from most ports).

The game is most well-known for being the inspiration behind obscure Sonic character Bean the Dynamite, who appeared in Sonic the Fighters and hasn't appeared since (outside of cameos and appearances in Sonic the Hedgehog (Archie Comics)).