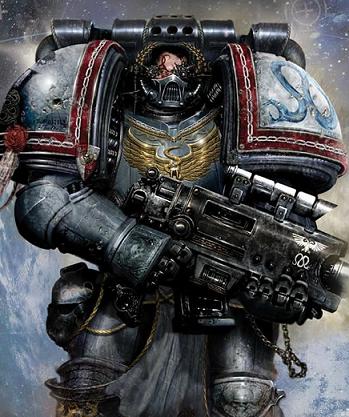 Anyone between ten and two o'clock is in serious trouble.
"For the body, notice they don't have shoulder pads, which is something that everybody seem to love to put on soldiers in video games. I don't know why. I don't know if they think that soldiers will be tackling people."
— Ted Backman, Half-Life 2: Raising The Bar
Advertisement:

Be it pads, armor, or epaulets, the Big Bad and The Hero have the biggest shoulder-wear.

This is most common in fantasy or science fiction: fantasy armor can easily have huge pieces of armor on the shoulders, and science fiction can easily create a future costume (or armor) with huge shoulders. They may also come with a ridiculously high collar, Spikes of Villainy, or an All-Encompassing Mantle for the aspiring Evil Overlord.

On occasion, the shoulder pads can actually serve a purpose, by having a cape attached to them.

There are both artistic and function-related reasons that this trope existes: Artistically, the inverted triangle (i.e. one point pointing down) generally conveys a more sinister form, and shoulder pads help the torso form a triangular image. From a distance, you may also be fooled into thinking you're fighting some undead headless monster. And, as the picture of the Space Marine shows... it looks quite intimidating. Also, large shoulder pads add additional mass to the upper torso and create a tapering body shape, which instinctively registers as a fit, muscular build. i.e. a do-not-mess-with-me-physique.

The functional reason is all about mobility. Because the human shoulder joint can pivot slightly over 180 degrees both horizontally and vertically, rigid shoulder armor cannot be fitted tightly to the shoulder. It must be either free-floating (fastened to the breast- and back-armor by straps or some other flexible material) or have enough room for the joint to pivot within it (a big, ball-like shape). They still don't need to be as big as most costume designers make them, however. Sometimes huge shoulders (especially on Powered Armor) are handwaved as actually being storage, as well - most often for ammo.

In video games, it's often used because the ball-and-socket joint of the shoulder was very difficult to incorporate into a player model without causing clipping and an action-figure look. Modern games designers use the look because it is still very difficult to properly animate the shoulder joint- it involves four bones, several unusual muscle groups and an irritating degree of twistability. It can also be a pain to generate a texture to cover this smoothly - a shoulder pad allows artists to make one texture for the torso and a separate one for the arm without really caring how they join.

The overall psychology behind this is Truth in Television. Broad shoulders suggest greater muscular strength in the arms and upper body, making a character look both sturdy and intimidating. Characters who are thicker around the middle may be just as strong or good at fighting, but they will more often play the Boisterous Bruiser because they lack the intimidating emotional effect on the audience.

If they are round enough, they overlap with Giant Poofy Sleeves. See Shoulder Cannon for when a Cool Gun is mounted on them (for some literal "Doom"). If they're not so much shoulderpads as a pair of shoulder-mounted towers, then they're Vertical Mecha Fins.