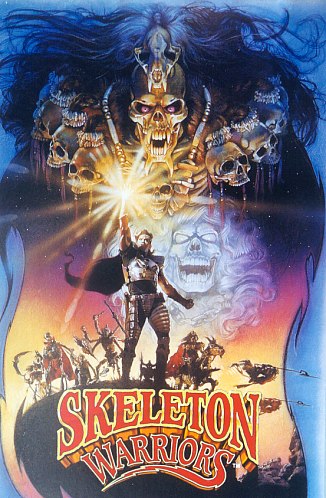 "These are the tales of the Skeleton Warriors..."

Skeleton Warriors was a short-lived Saturday Morning Cartoon made by Landmark Entertainment Group and broadcast by CBS in 1994.

The story is set on the planet Luminaire, with the Lightstar Crystal as the center of the series. Baron Dark tried to steal it, but he could obtain only half of the Crystal, empowering him with the ability to turn people into the eponymous Skeleton Warriors, while Prince Lightstar, the one who was guarding the crystal, obtained the other half. Then, a battle ensued, in which each side tried to obtain the other's half while guarding its own. Lightstar isn't alone, since his siblings, Joshua (who was closer with Baron Dark until their Karmic Transformation) and Jennifer, and their uncle Ursak formed the Legion of Light. Their half of the crystal gave them many powers, such as energy channeling (Lightstar), flight (Jennifer/Talyn) and shadow-travelling (Joshua/Grimskull).

Video games for Sony PlayStation and Sega Saturn were released, as was a toyline. The cast also appeared in the 1994 Macy's Thanksgiving Day Parade, and a Kickstarter campaign

for a revival of the toyline was successful.

"These Are the Tropes of the Skeleton Warriors..."