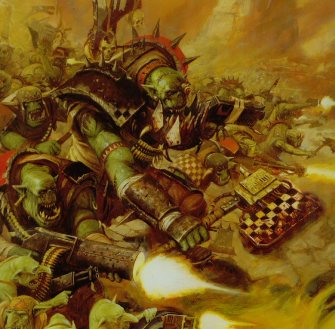 In general, cultural sophistication is often assumed to go along with the technological kind — as a civilization becomes more advanced, it's expected that it will become more civilized and sophisticated as well. These guys are living arguments against that, retaining distinctly barbaric cultures even while utilizing and producing technology far ahead of what we have in real life. At best, they will retain social mores and values most societies leave behind when they exit the bronze age, remaining focused on and accepting of warfare, raiding, piracy, slavery and personal vendettas. At worst, they'll be pillagers, warmongers, and a generally murderous or thuggish lot — The Horde in space — lacking even the honor codes of a Proud Warrior Race that regulate how they go about combat and glory-seeking.

Their technological base may vary in nature and advancement. They generally have much more primitive technology than other factions, which in space age settings may range from near-modern industrial machinery to them being still in the stone age. When they have reliable tech of their own, it will often be more primitive than what's normal for the setting, or at least more used, dirty and worn in appearance. Often, they may have obtained what tech they have from someone else, whether this was stolen or given to them by other factions seeking to use them as armed forces. It's in fact fairly common for Space Orcs to work as Mooks, mercenaries and soldiers for others — it keeps the other group away from the bloodshed, and these guys rarely care who or why they're fighting as long as they are.

Note that not every one of these qualifiers need apply. Space Orcs may possess and maintain sophisticated technology of their own, although this will be mostly put to use in waging war and killing people. They may also be a neutral or even heroic faction, albeit one in the vein of the Noble Savage who shuns technology and civilization in favor of a life of warfare, hunting and physical combat.

Sometimes, these alien will be literal fantasy orcs, ogres or similar fantasy races IN SPACE! Otherwise, they most commonly resemble Hollywood ape-men or simian creatures of various sorts, in which case they may overlap with Killer Space Monkey. When not ape-like, they may resemble a Pig Man.

Subtrope of Our Orcs Are Different and Low Culture, High Tech; frequently an Insufficiently Advanced Alien. Contrast Space Elves, who are most often associated with advanced technology and magic and with refined cultures. Often overlaps with Planet Looters.