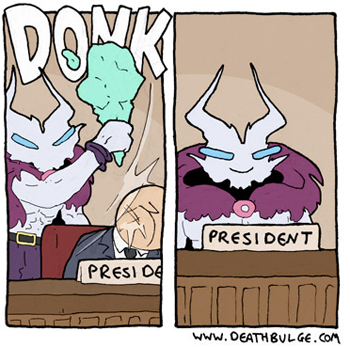 In an organization with a ranked hierarchal structure, you can get a promotion by showing aptitude for the work, impressing senior ranked individuals, fulfilling certain criteria, having a place open up due to retirement, resignation or death, and probably kissing a lot of ass. Or you can kill them and take their job.

This is about the latter, not the former.

This is a sister trope to You Kill It, You Bought It. However, in that one, you kill someone, purposefully or accidentally, and gain something of theirs (whether you want it or not). That could be a physical object or something more metaphysical, like a role in life or a curse, and you don’t need to have a system that puts the character in a position to get the job. This requirement of a rank to get into for a Klingon Promotion means it will show up in connection to different sorts of organisations.

For instance, the Klingon Promotion will turn up in organisations that favour ruthlessness and the heavy dominance of a leader. Hence the trope name referring to the Klingons of Star Trek, who are often portrayed as accepting assassination of a superior (with varying justification) as a legitimate option for career advancement. You’ll get it in royal or noble lines of succession where individuals can obsess over the fact that if only 72 people would die in a very short period, they could become King.

A common subtrope is the Challenging the Chief trope where the role of boss goes to whoever's the biggest badass, who can kill or defeat any other badass in ritual combat.

Perhaps the focus will be on a character who uses this method often to get ahead in the world. They could easily then be The Starscream, and if we get the chance to follow them going through several stations in life, advancing themselves with cunning, guile, and possibly the odd bottle of arsenic, we might get to see them as a Manipulative Bastard and maybe a magnificent one.

This trope tends to enforce its Super-Trope: Superior Successor.

Asskicking Equals Authority is when you get a society that works based on this trope. The Evil Prince tends to see the world this way, due to his position. Occasionally, a superior can forestall it with Kill Me Now, or Forever Stay Your Hand. May result in You Are in Command Now if the replacement is lacking in qualifications for the position they gain and/or pulls off a Klingon Promotion by accident.

In practical use, this is a dangerous gamble on the part of the killer, since if he kills a superior who has popular support, he will most likely be killed very quickly himself before he gets an opportunity to enjoy his new power. Also, most don't take well to an unproven upstart killing a superior who has experience and the wisdom to rule effectively, especially when it threatens the status quo. However, no one will mind the killing of an officer who has failed too many times, as long as the killer knows what he is getting himself into now and everything that goes with it. Most of the time, an individual who decides on Klingon Promotion probably does so with the backing of parties sponsoring his actions, thus protecting him from retaliation (leverage). And even then, there still might not be anything to protect them from certain avengers for whom It's Personal. This is similar to how most real-life politicians rely on the support of others to get them in a position of power and keep them there.

Fictional societies that function on this rule often display its downsides. When leadership is predicated solely on being quicker on the draw than the opponent, there is no guarantee that any leader is at all qualified for the position they want, resulting in repeated misrule. Long-term planning is next to impossible since leadership changes hands often and violently, leading to stagnation. Nobody can count on anyone else not to betray them on a whim, which tends to make morale drop to rock bottom. Worst of all, no leader is likely to have the time, ability, or even motivation to improve the situation, since they are too busy fending off usurpers. Woe betide the organization when more than one candidate attempts a power play at once: the organization will likely tear itself apart before one of the usurpers comes out on top. This is a common cause of collapse for evil organizations. Expect a moral about trust and comradery to come from heroes who encounter these situations.

If someone did it by killing the former leader stealthily and impersonating them, this is Kill and Replace.

The Professor makes a checkout call to the band. Berlin claims that things are running smoothly, but the Professor knows that they are not. Nairobi, another member of the band, had enough of him, attack him and take over leadership of the band.

The Professor makes a checkout call to the band. Berlin claims that things are running smoothly, but the Professor knows that they are not. Nairobi, another member of the band, had enough of him, attack him and take over leadership of the band.