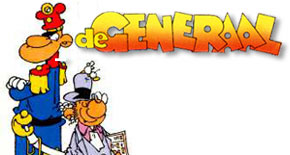 The General and the Professor
Advertisement:

The comic follows the misadventures of a nameless general, who in each comic tries to conquer a fortress and drive out the Marshal, thus gaining as he calls it "de macht" (the power). He is helped in his efforts by a (also nameless) zany professor and a soldier, and armed with a rather ancient tank. The General's HQ is a preciously guarded tree. To conquer the fortress, the professor usually comes up with complicated plans and inventions, which horribly backfire or fail due to unforeseen circumstances. After a failed attack on the fortress, the General is usually imprisoned in the fortress' prison block.

Another character the General frequently runs into is a police constable named Dreutel, who always tries to arrest or book the General for breaking just about any law or rule the policeman thinks applicable, but his attempts to do so always result in him and/or his motorcycle being completely destroyed.

Especially the older comics followed a pretty strict formula. Later comics started to use more complicated storylines and introduced more characters, like the General's son Junior, his mother, and grandfather, the professor's attractive niece Truus, and a couple of boy scouts and their leader.