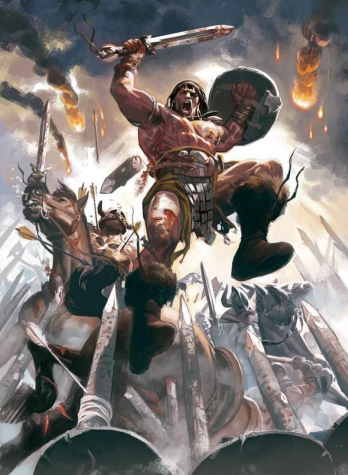 From out of the earth's dark, forgotten past-- thru the timeless terrors of the Hyborian Age-- stalks the mightiest hero of them all--!
— Original in-house advertisement for the Marvel series.
Advertisement:

During the resurge in popularity Robert E. Howard's most popular character enjoyed back in The '70s, Marvel Comics was quick to take notice of this, and got the license from Conan Productions. In October 1970, the very first issue of Conan the Barbarian hit the shelves, quickly becoming one of Marvel's top-sellers. Spin-offs soon followed, each becoming popular in their own right, with The Savage Sword of Conan the Barbarian occasionally overtaking its sister title in sales.

However, what with certain cinematic failures i.e. Conan the Destroyer and the Red Sonja movie, Conan's popularity waned. During The Dark Age of Comic Books, Conan's main ongoing and Savage Sword were eventually cancelled after a combined 510 issues, to be replaced with other ongoings whose issue numbers barely lasted into double figures. Marvel soon gave up on giving Sword and Sorcery's greatest hero his own title, shunting him off into a few miniseries, the last of which was printed in 2000.

Dark Horse Comics then picked up the license in 2003, having previously made several miniseries based on lesser REH properties, such as Cormac Mac Art and Almuric. They took a slightly different approach to the character, putting out one ongoing, with the occasional miniseries on the side.

In 2018, Marvel announced that they had regained the Conan license from Dark Horse, with tentative plans to reintegrate the character into the Marvel Universe a year later. Two titles are currently ongoing: Conan the Barbarian by Jason Aaron and Mahmud Asrar and Savage Sword of Conan by Gerry Duggan and Ron Garney. There are also three page Conan novellas at the end of every Conan issue. There are also several miniseries, such as Age of Conan: Bêlit by Tini Howard and Kate Niemczyk, and Age of Conan: Valeria by Meredith Finch and Aneke. In addition, the Savage Avengers series (written by Gary Duggan and illustrated by Mike Deodato Jr.) features Conan as a member of a more violent incarnation of the team, which includes the likes of Wolverine, Venom, Elektra, The Punisher and Brother Voodoo. The character is also central to a miniseries called Conan: Serpent War which includes Solomon Kane, Dark Agnes and Moon Knight. He also featured in a later miniseries Conan: War for the Serpent's Crown where some robberies in Las Vegas leads to an adventure around the world involving various Marvel characters.

Final interesting piece of trivia: It was in fact the Marvel comics series that popularizednote  We say "popularized" because one of the earliest collections — without the iconic Frazetta covers — had used the name. the franchise's title as specifically "Conan the Barbarian"

— that title being specifically chosen by Thomas to not conflict with the paperback short-story collections with titles like Conan The Adventurer and Conan of Cimmeria.

These comics have all included these examples:

These tropes happened specifically in the Marvel Comics run:

These tropes happened specifically in the Dark Horse Comics run: