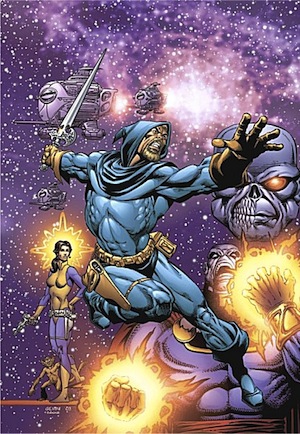 Dreadstar was a sci-fi comic book series created by Jim Starlin and published by Epic Comics (a division of Marvel) in 1982. It starred protagonist Vanth Dreadstar, his somewhat-mentor and right-hand-man, sorcerer Syzygy Darklock, and an ensemble cast of crewmates. It was essentially the fourth act of "The Metamorphosis Odyssey", a lengthy allegorical story also published by Epic and told in several distinct parts ranging from illustrated magazines to graphic novels to comic books. The eponymous character Vanth Dreadstar had been introduced in Epic Illustrated #3 (September, 1980).

Act ONE starts with an immortal mystic named Aknaton, whose Osirosian race (the elder of two oldest, most powerful races in the Milky Way galaxy) has just begun a marathon war against the second-oldest race, destroying conquerors known as the Zygoteans. Despite massing their power and confronting the Zygoteans directly, it becomes evident this is a war of attrition that they will lose due to the Zygoteans ability to continually 're-arm' themselves quicker by looting every resource available from every planet they conquer.

As the Zygoteans conquered, enslaved, and exterminated more and more of the Milky Way, the Osirosians concluded that the Milky Way was doomed to a long, slow, horrible death and evolved a plan to destroy the Zygoteans, whatever the cost. Running the Zygotean blockade of his homeworld, Aknaton set various events in motion to mature over time into the elements he needed for his final plan. As it was coming to its fruition, Aknaton found Vanth Dreadstar and recruited him to be his pilot and bodyguard. Vanth leapt at the chance that there might be a plan to destroy the Zygoteans; though he was shaken when Aknaton revealed the exact nature of the plan to him and the others. Aknaton had reasoned that since the Zygoteans were undefeatable, and the death of the galaxy could not be prevented, the only remaining kindness was to make the end as quick and painless as possible. Therefore, he had created the Infinity Horn...whose purpose was to destroy the entire Milky Way. Appalled, but convinced that Aknaton's plan was the only option, Vanth agreed. Protecting the only three 'pure' beings who could sound the Infinity Horn, Aknaton and Vanth escorted them to the planet where Aknaton had hidden it. As Aknaton and Vanth held off the Zygoteans, they sounded the horn, destroying the Milky Way galaxy and everyone in it.

Immediately before the first note sounded, though, Aknaton had used his mystic powers to encase himself and Vanth in a bubble of force and throw them into intergalactic space. Eons later they crashed on a planet in another galaxy, where Vanth shot Aknaton in a fit of rage and guilt over the destruction of the Milky Way galaxy. Mortally wounded, Aknaton confessed that he had goaded Vanth into killing him because he could not live with the guilt. As he died, he told Vanth that he had saved him and brought him here because this galaxy was at a point where it might go down the same path as the Milky Way. Aknaton wanted Vanth to change the destiny of this new galaxy, and if he failed, to then locate the Infinity Horn to destroy this galaxy as well.

Act TWO, a single graphic novel title "The Price", tells the story of the magician-priest Syzygy Darklock- his rise to power within the Church of the Instrumentality, his personal conversion from aloof priest to a man who wants to end the war, his quest to attain the power necessary to make a difference, and the personal sacrifice(s) he must make to gain them. Although a part of the Dreadstar mythos, this is a solo story featuring Syzygy Darklock, with Vanth Dreadstar only making a brief appearance at the end.

Act THREE was the Marvel Graphic Novel #3, Dreadstar, published in 1982. It was somewhat unique at the time in that the entire novel's artwork was not drawn but painted by Starlin. Having been duped into 'euthanizing' the Milky Way Galaxy at the end of act one, Act Three/"Dreadstar" begins when, after having traveled through the universe in stasis for thousands of years, the force-bubble he was trapped in finally enters another galaxy and crash-lands on a peaceful planet mostly ignored by the warring factions. The planet on which he crashed was the site of an Instrumentality experiment to create a race of cat-human hybrid warriors. While the experiment was considered a failure (the hybrids were mild-natured and generally only suited to farming), the race it produced was allowed to survive and procreate, as their farming efforts were prolific as to make them an asset for the Instrumentality's war effort. Wanting to live in peace after years of fighting, Dreadstar rid himself of his sword, married a human scientist studying the indigenous population, and lived quietly for decades as a farmer himself, until the arrival of Darklock. The sorcerer tries to enlist Vanth to stop war, but Vanth refuses to return to a life of killing. Shortly after the arrival of Darklock, a fleet of Monarchy ships arrives and, based on the outdated "experiment to create a race of cat-human hybrid warriors" intel, destroys his home village. The fleet not only kills all his friends (except one), but upon finding his wife some of the ground troops rape, torture and murder his wife (justifying it as a moral outrage base on her presumed 'bestiality' in living there). Vanth picks up his sword again, however, he refuses to immediately join forces with Syzygy. First, he gets off the planet, and enlists in the Monarchy military. Over the course of the next decade or so he rises rapidly through the ranks. Finally, after reaching the right rank and command, he is in position to order a decisive military strike that secures a victory on the battlefield for the Monarchy with a minimum loss of life; the losses they do incur, though, include the ENTIRE SQUADRON that carried out the attack on his former home. Having avenged the death of his wife and friends, he (presumably) goes AWOL shortly thereafter and joins Darklock in an effort to end the war completely.

Act FOUR, the "Dreadstar" series, chronicles Dreadstar and his crew's struggle to end an ancient war between the two powerful, pretty much equally evil ruling empires: The Church of The Instrumentality, run by the Lord High Papal; and the Monarchy, administered by a succession of puppet kings.

Dreadstar has changed publishers and formats over the years.