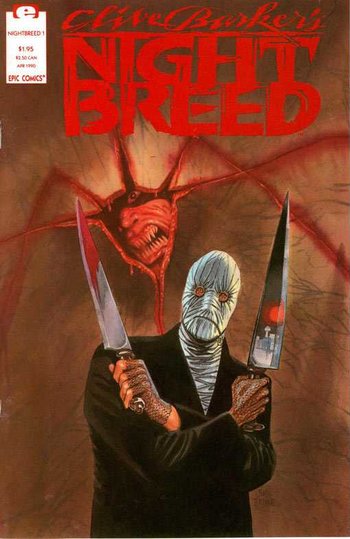 The Nightbreed are a race of misfit monsters who live in semi-mythical land named Midian, which is Another Dimension, a Magical Land, and necropolis found beneath a cemetery. The Nightbreed are first seen within CliveBarker's novel 1988 "Cabal". Midian offered sanctuary to the Nightbreed, many of whom might once have been human. Like other works by Barker, "Cabal" has a Gothic Horror setting, with Hell Seeker characters (Boone/Decker seeking Midian), and themes like Humans Are the Real Monsters, since murdering humans are trying to wipe out the monster's safety.

This novel "Cabal" inspired the movie Nightbreed. It also inspired a few comic book series. Epic Comics had a 25 issue run between 1990-1993, called "Night Breed". Notice the space between "Night" and "Breed", which is distinctive for the Epic Comics series. The Boom! Studios imprint has no space, "Nightbreed". Boom! Studios published a 12 issue "Nightbreed" run between 2014 - 2015, and a 3 issue run during 2016 - 2017. Epic Comics also published a 2 issue crossover with Hellraiser named "Hellraiser Nightbreed: Jihad" during 1991.