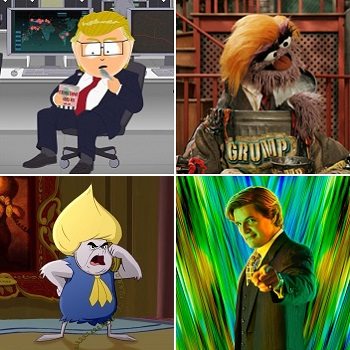 Trump knows parodies. He has the very best parodies, the very best. Everyone tells me, every day, he has the best parodies. Bar none. Take a look at these parodies. Are they not the greatest? note Clockwise from top-left: Mr. Garrison from South Park; Ronald Grump from Sesame Street; Maxwell Lord from Wonder Woman 1984; Snerz from Green Eggs and Ham.
"Before he became the inciting incident in the post-apocalyptic thriller that is our age, Donald Trump spent most of his life cultivating the image of a disgustingly wealthy businessman and cameo-worthy celebrity. He was the rich bully of his time, inspiring many movies and TV shows to feature barely fictionalized versions of him as villainous characters meant to symbolize the greed and cynicism of 1980s capitalism. Interestingly, none of the following examples ever went so far as to imagine a future in which this character would become president."
— Cracked, "The 6 Most WTF Hollywood Depictions of Donald Trump

The Trumplica is an often unflattering example of an Eccentric Millionaire that tends to appear in works of fiction made after 1980, designed after probably the most iconic (for better or for worse) of the decade's many corporate tycoons: Donald Trump.

Defining traits of the Trumplica include an extravagant fashion sense based more on flaunting wealth than looking stylish. Bouffant yellow hair is usually the defining part (although this hair may sometimes actually be a separate, distinct creature of some sort, such as a Puppeteer Parasite). In works published from the 2000s onwards, the large yellow hair may actually be a Dodgy Toupee, reflecting the real Trump's own hair loss around the same time and his use of toupees and/or bizarre combovers to cover it up. Other defining traits include a wealthy parentage (sometimes combined with Abusive Parents and "Well Done, Son!" Guy), an attitude of a self-important blowhard (with Glory Hound traits mixed in sometimes), high celebrity profile, one or more wives young enough to be their daughter, thinly disguised racism and classism, control over a major corporation (property development being the most likely), hedonistic depravity, and an insatiable urge to own more. From the 2000s onward, involvement in reality TV may also be a prominent trait, as are political ambitions as high as the Presidency.

More often than not, gold is their dominant colour. Their hobbies include playing golf, partying on yachts, and shooting exotic animals. Most examples are middle-aged at the youngest and overweight due to a lifetime of over-consumption, with these traits becoming more prominent the later the work is set (again, indicative of Trump's concurrent aging over the decades). May be Idle Rich, but are more often than not a prominent figure on their company's board of directors, in which case their catchphrase will definitely be "YOU'RE FIRED!" or some variant thereof. They will sometimes wear a fake tan, which in more comedic works may be bright orange. References to Oompa-Loompas as they appeared in Willy Wonka & the Chocolate Factory may also be present in comedically-oriented works.

This trope experienced a revival after Donald Trump won the 2016 United States presidential election, spawning a new generation of Trumplicas that serve as stand-ins for the POTUS. Such portrayals tend to be extra-negative, owing to many prominent writers being in opposition to Trump's policies during his term. Presidential Trumplicas share the conspicuous wealth and excessive consumption of earlier portrayals, but they will also be jingoistic to a fault, typically espouse far-right views (usually comedic and/or satirical exaggerations of Trump's own), have an adversarial relationship with the press (despite loving the attention), and will demonize critics as liars or conspirators. Parodies of Trump's ostentatious speaking style, emphasizing his own wealth and supposed achievements in a distinctively repetitive manner, also tend to be more common with comedic post-2016 portrayals, largely due to this style making its way into his speeches and other public appearances as a politician.

A subtrope of No Celebrities Were Harmed. Obviously, if it's unambiguously supposed to be Donald Trump himself instead of a stand-in, that's The Cameo, Adam Westing, and similar tropes, not this one. If it's established that the real Trump also exists in the same universe as the Trumplica, you have a case of Expy Coexistence.

Contrast with The Scrooge, who is far more miserly with their riches, and Bourgeois Bohemian, who prefers to live a less materialistic lifestyle in spite of their wealth.

She's a filthy rich, cutthroat businesswoman who at one point becomes the president of the USA.

She's a filthy rich, cutthroat businesswoman who at one point becomes the president of the USA.