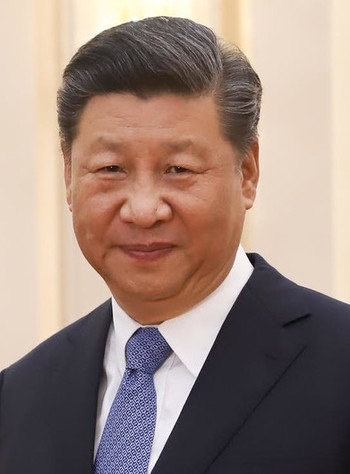 Hunny
"We will never allow anyone, any organisation, or any political party, at any time or in any form, to separate any part of Chinese territory from China".
Advertisement:

Xi Jinping (born June 15, 1953) is the current President of the People's Republic of China, and the General Secretary of its sole governing Communist Party, serving since 2012, and one of the most controversial figures of the early 21st century.

Xi was born in Beijing to Mao's Propaganda Minister, Xi Zhongxun. Unfortunately for the Jinping, his privileged upbringing was cut short when his father was purged during the Cultural Revolution and one of his sisters was killed by student militants. Zhongxun was thrown into prison, and the would-be-President of China was exiled to a rural village, where he lived in a cave for several months, before attempting an escape back to Beijing. He was arrested following a crackdown on escapees and forced to dig ditches in a labour camp. By befriending a local official, however, Xi managed to join the Youth League before attempting to apply for the Communist Party (he would finally be accepted on his tenth attempt). After this, he studied chemical engineering and politics at Tsinghua University.

Starting as the deputy party secretary of a small county, Xi served in four different provinces throughout his career, serving as Governor of Fujian and Party Secretary of Zhejiang, where he came to prominence for his purges and anti-corruption campaigns. In 2007, he was transferred to Shanghai following a scandal that resulted in removal of it's previous Party secretary. In 2008, he was selected by the Vice President for Hu Jintao, an infamously bland leader with the charisma of a brick (and later establishment Butt-Monkey). Throughout his tenure, Hu presided over increasing corruption in the government before stepping down in 2013. In the same year, Xi was appointed president by the Party, mostly on the belief that he would sit down and file paperwork. It didn't go so well. Upon entering the office, Xi began to purge political rivals for supposed corruption. Among the purged was Bo Xilai, whose wife was well-known in the west for killing a British businessman, and Zhou Youkang, who oversaw China's law enforcement. These actions endeared him to a section of the Chinese populace who grew tired of rising corruption during the term of his predecessor. In 2018, Xi amended the constitution, removing term limits and was effectively turned into China's President for Life.

While the PRC was by no means considered a free country by any measure, it is thought that it has become more repressive under Xi's tenure than ever since it opened up and readjusted its system to the rest of the world. The censorship campaign became infamous when memes of Winnie-the-Pooh were blocked on Chinese social media after comparisons with Xinote Despite popular claims, the franchise itself was not banned in China and even has a ride at Shanghai Disneyland. His "Xi Jinping Thought" became enshrined in the Chinese constitution and universities have implemented it in their curriculum, something not seen since Mao Zedong. This implementation has brought a perceived Cult of Personality surrounding Jinping that is not only widespread across Mainland China but enforced by authorities and followers as well. Under his administration China seems to have shifted from its previous stance to become more involved in the international community as well as its exerting influences, most notably in Africa, Latin America, and South Asia. Jinping's term has also pushed for the reintegration of Taiwan and Hong Kong to the mainland as well, with both being referred to under independent pretenses being a major Berserk Button for Chinese nationalists to the point of harassment and demands of apology from those who acknowledge Taiwan. note For the former, Taiwan is very split down the middle regarding supporters of reintegration to the mainland or complete independence. Many public figures are forced to apologize for offending Chinese citizens who dropped Taiwan’s name even in passing, sparking much outrage from the public and governments who are against China’s increasing industry and political influence across the world. On the latter, Hong Kong is meant to be completely integrated back into China in 2047 as agreed between China and Britain (as Hong Kong was under British control until 1997) but new security laws put to effect in Hong Kong over the year brought widespread belief that China was gaining a foothold there nearly fifty years too early. This resulted with many violent protests from Hong Kong supporters with plenty of Police Brutality recorded for the world to see over keeping Hong Kong independent. Similarly to Taiwan, many companies who rely on China’s industry and economy distance themselves from these politics if not outright supporting the authorities’ side and removing/punishing those who associated with the company for publicly supporting the protests. This has also caused outrage and debate over these corporations prioritizing a market place over human rights.

Xi Jinping has been featured/referenced in the following media: