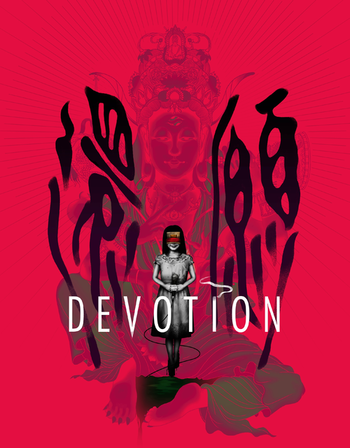 Where is Mei Shin?
Advertisement:

Devotion is a Taiwanese independent horror game developed by Red Candle Games, who also made Detention. It was initially released on Steam on February 13th, 2019, but was delisted a week and a half later following "technical issues

that the game would be rereleased on GOG.com, although later that day GOG rescinded on selling it

, with RCG saying they would still work on making the game available to purchase again. On March 15, 2021

, Red Candle Games launched their own digital storefront to sell the game on.

The story takes place in Taipei, 1987, and opens with screenwriter Du Feng Yu enjoying a relaxing evening watching television in the living room of his apartment while his wife, Gong Li Fang, chats with him about his young daughter, Mei Shin, from the kitchen. But just as she's about to finish bringing dinner to the table, she asks:

Feng Yu blinks, and opens his eyes to find himself still in front of his TV set, but now it's only picking up static. Feng Yu is alone in the dark, and his apartment has been wrecked. He sets out to find his daughter, but for some reason a ghost lady is intent on obstructing him. What happened? How did he get here? And, most importantly, where is his daughter?

This game is heavily story-driven, so spoilers abound.

Not be confused with another 2019 game, a French Metroidvania called Dark Devotion.

Devotion has examples of the following tropes: