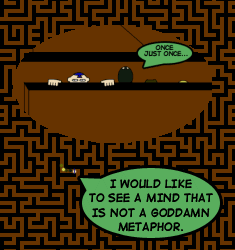 What else could the mind of a Double Reverse Quadruple Agent with Chronic Backstabbing Disorder possibly look like?
Razputin: So this is it... the mental world.
[Beat]
Elton: It looks like a dentist's office.
Razputin: A mental dentist's office!
— Psychonauts
Advertisement:

A Mental World is any world that exists inside a person's mind (or heart, soul, whatever, but not their physical body). Similar to Dream Land and Cyberspace, a Mental World does not follow the regular laws of physics, and may ignore or respond badly to characters trying to use logic or force. This world is usually entered by some type of telepathy, either magical or technological; if the character whose mind contains the Mental World is sleeping or unconscious, then their individual dreamworld may be attached to a larger Dream Land or collective unconscious, which makes it enterable by other dreaming or meditating people.

Symbolism is king here, sympathetic magic may be in operation, and puns, metaphors, and metamorphoses may be common. Because this world is based on an individual's (possibly incorrect) beliefs, it may contain multiple Evil Twin versions of both the owner's personality and that of anyone else (s)he knows, especially the people exploring the world. Sometimes this works in the other direction, and changes made inside the Mental World may change the beliefs of the individual who is the source of the world in question.

In other cases, this Mental World is more like a magical pocket dimension where the controlling mage can wage battles, imprison others, hide themselves from enemies, or even take a friend for a vacation. In this case the world does not necessarily exist strictly inside the character's mind, but still behaves as if it does because it is woven out of that person's magic and actively connected to that person's mind (and still generally representative of their "self").

Oftentimes the world is surreal and barren and may be a space-like void with stars, multiple suns, and small chunks of floating rock or debris that may be used to get about, like stair-steps.

See also Vision Quest and Ghost in the Machine. Tends to be a Wackyland, especially when exploring one's personal mind. Not to be confused with Womb Level.

Squidward tells SpongeBob to empty his mind of anything that isn't fine dining (and breathing), and we are shown his inner thoughts.

Squidward tells SpongeBob to empty his mind of anything that isn't fine dining (and breathing), and we are shown his inner thoughts.