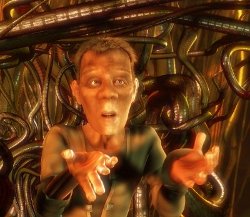 Emo gets Emo
The machine is like...like clockwork. One move out of place and you're ground to a pulp.
—Proog
Advertisement:

Elephant's Dream is a 10-minute computer animation by the Blender Foundation, created between 2005 and 2006 as a testing ground for the open-source 3D modeling software Blender.

An old man named Proog guides a gaunt young man named Emo through what looks like a Clockpunk universe, extolling its many wonders and perils – but can we take Proog's words at face value? The Mind Screw nature of the work has engendered much outlandish interpretation, while Word of God suggests the work is actually quite simple

Elephant's Dream is released under Creative Commons Attribution 3.0, and is downloadable at its own Web site

. The Blender Foundation went on to make Big Buck Bunny.