The Nothing After Death 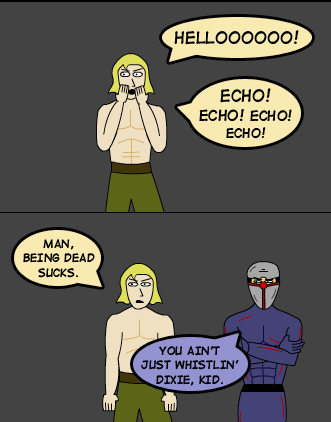 The Nothingness is an afterlife where souls go to a bleak, featureless Plane of (Non) Existence. Whether or not this "non-existence involves the souls" existence and whether or not souls are consciously aware of the lack of existence around them is Depending on the Writer.

Not to be confused with the idea that there is literally nothing after death: no darkness, no featureless planes, no conscious awareness, simply a Cessation of Existence. Some people find that thought comforting; to others, it is worse. This trope is when there is something after death, and that something is empty space.

Sometimes this is used as an Ironic Hell against a Flat-Earth Atheist, but just as frequently, Nothingness does not discriminate and everyone, good and bad, goes there.

This one of many ways to depict Hell, since isolation isn't exactly peachy. A step below Purgatory and Limbo, within which, bleak or dull though it may be, at least there's something. A possible explanation for Death Amnesia, and a possible destination for those who are Barred from the Afterlife. Compare Void Between the Worlds, another type of empty dimension. See also White Void Room, which may be the easiest visual way to depict the Nothingness. A frequent purpose for people who try to build an Artificial Afterlife is to avoid this or the Cessation of Existence.

Alternative Title(s): Nothing After Death