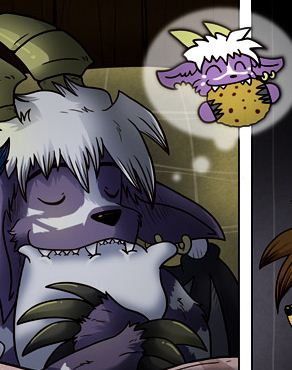 This is precious. Unless you're a pillow.
"Okay, so funny story: I had a dream I was eating my pillow."
— Tiger Arbelt, Housepets!
Advertisement:

"Last night I dreamed that I was eating a giant marshmallow, and when I woke up, my pillow was gone!"

Simply put: a character is dreaming about doing something (such as eating a giant marshmallow) while in the waking world, they are doing that thing to some real object (or person!) at hand, such as their pillow, often ending with them waking up with a mouthful of feathers. This is a staple dream type found in comics and animation. Though eating is the most typical version of this, other activities can also be involved.

The lower the dreamer's intelligence, the more likely this is to happen, and the less need for there to be an actual marshmallow in the dream. Big Eaters are, of course, prone to this trope as well.

Always Played for Laughs, it exists solely due to Rule of Funny. It's likely Older than You Think.

Not to be confused with Marshmallow Hell. Though now that it's been mentioned, it's only a matter of time before somebody figures out how to combine them note Which has since happened in the anime version of Miss Kobayashi's Dragon Maid, see Anime & Manga, below.. Compare Crashing Dreams, Acting Out a Daydream, and Delicious Daydream.