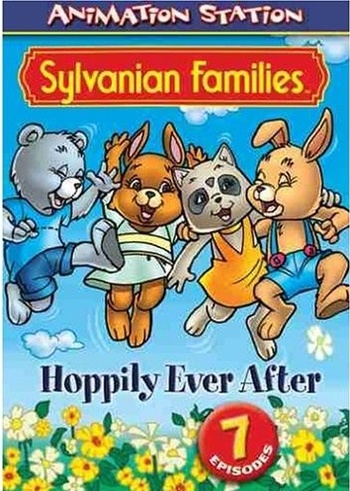 Sylvanian Families (1987) is an animated series produced by DiC Entertainment to cash in on the Sylvanian Families franchise which was reaching the peak of its popularity at the time. Each episode, a small child with a problem makes a wish about something that might cause An Aesop, and then meets a magic woodkeeper who opens a door to Sylvanian Forest and shrinks them. They enter and meet a few of the Sylvanian Families, after which they learn the Aesop of the episode, which usually has something to do with either how you should have been happy all along, or that you should quit being such a Jerkass.

Based on a toy line created and originally released in Japan by Epoch Company in 1985, the 1987 series was of American origin, though 3 Japanese studios, K.K. DiC, Tokyo Movie Shinsha and Studio Mook, provided animation production, TMS & Mook being uncredited. After the success of the show in the UK, a short four-episode stop-motion series of UK origin, titled Stories Of The Sylvanian Families, followed in 1988. This was followed in 2007 in Japan by a three-episode 3DCG-animated OVA series, and in 2017 with a series of Netflix-exclusive OVAs and shorts.

Compare to Mapletown, which aired on U.S. TV at the same time. On a fascinating side note, Haim Saban (yes, that Saban) and Shuki Levy were involved in both projects, although their involvement in Sylvanian Families is minimal.