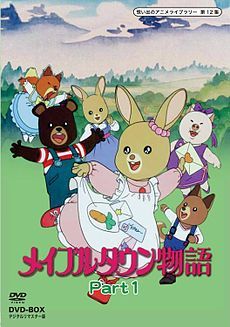 Come Down To Maple Town! Surrounded by smiles as warm as spring sunshine!
My favorite place to be... Maple Town and me.
Advertisement:

Maple Town (Maple Town Monogatari) was an animated television series, created by Chifude Asakura, produced by Toei Animation and Asahi Broadcasting Corporation of Japan and originally broadcast on that country's TV Asahi network in 1986 and 1987. The show centered on a community of anthropomorphic animals; its main characters were Patty Rabbit and her friend, Bobby Bear. The town was an impossibly friendly, cheerful place, with the only trouble being caused by the thieving swindler, Wild Wolf, and occasionally by the bratty but generally good-hearted Fanny Fox.

In the U.S., Saban Entertainment produced a partial English dub of the series (the first 26 episodes) and added a live-action segment focusing on the moral of each episode, starring Janice Adams as Mrs. Maple. This version aired in syndication and on Nickelodeon and later The Family Channel from 1987 to 1993, and the accompanying toy line was released in the United States by Tonka. In Canada, the series aired in the late '80s on YTV.

After 50 episodes, the series underwent a format change and changed its name to "New Maple Town Stories: Palm Town Chapter." In this new series, Patty Rabbit moves away from the forested Maple Town (thus making the title rather misleading) and to a new setting, the tropical Palm Town. Waiting for her there are a new group of friends and troublemakers. None of the other Maple Town denizens tag along, making Patty the only regular character in both series. This move proved unpopular, and the series ended about a year after the change. Note that none of the Palm Town episodes were ever dubbed into English. However Palm Town arc has been aired in several countries such as Italy and Arabic speaking markets where the entire 50 episode run was translated and where it trumps Maple Town in popularity.

The show aired in many other countries, too, including France, Spain, Italy, Hong Kong, Taiwan, and the Netherlands. It's also noteworthy for being directed by Junichi Sato, who would go on to greater fame as director of anime like Goldfish Warning!, Sergeant Frog, Kaleido Star, Junkers Come Here, and most famously, Sailor Moon (which even included a Shout-Out to Maple Town in the form of a stuffed Patty-like rabbit owned by heroine Usagi Tsukino

◊). Kunihiko Ikuhara, who would direct the later seasons of Sailor Moon, also cut his teeth on Mapletown as assistant director.

Not to be confused with MapleStory. See also Sylvanian Families.

Down South is Palm Town!