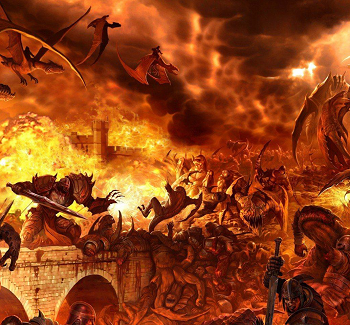 In this, the ultimate punishment for the Wrathful Damned, SOULs are forced to kill or be killed in a neverceasing battle between hundreds of armies. When the Damned are "killed," their bodies regenerate (making a keen "shlup-shlup" noise as they do), and they're sent back to the front to die anew.
— "War! (What is it good for?)" description, Afterlife (1996)
Advertisement:

War Is Hell. So what better way to punish your foes than to make them fight forever?

Basically, a scenario in which a character (or characters) in fiction is forced to fight indefinitely, usually as a form of Karmic Death. It doesn't necessarily have to be an afterlife.

The defining characteristics of the trope are:

Depending on how bad the punishment is, this can be used symbolically to support the argument that war is a terrible thing. A common subversion/inversion is for the "punished" character to enjoy the violence. Sealed Evil in a Duel is a sub-trope.

Compare and contrast Warrior Heaven, where getting to fight forever is your reward. Although note that several examples are both depending on which combatant you ask. Compare Forever War, a war in the living world that's been going on for a really long time.