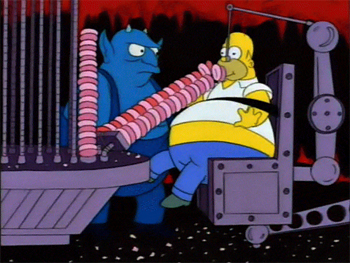 "So, you like donuts, eh? Well, have all the donuts in the world! Hahahaha! [...] I don't understand it, James Coco went mad in fifteen minutes!"
"As for his sentence, remember what he said in the courtroom? His only thought, his only desire, was to be 'reunited with his crew'. I can't help thinking, after everything that's happened, after everything he's done, we gave him exactly what he wanted."
— Capt. James T. Kirk (Kelvin Timeline), Star Trek: Khan, Pt. 5
Advertisement:

The punishment equivalent of Attack Backfire: A character is legitimately guilty of some offense, tried and convicted, and sentenced to punishment, except that (whether intentionally or otherwise) the punishment in question is something that the character actually desires — they consider it some kind of reward instead (or maybe they don't, really, but they take the punishment in stride just to piss off their punisher).

This can be the result of a successful Briar Patching; alternately it may be the result of Deliberate Values Dissonance, Power Dynamics Kink, or being Too Kinky to Torture. Sometimes this is done deliberately as Restrained Revenge on the part of the punishers themselves, as a poetic way to combine reward and punishment for those who technically messed up but are Saved by the Awesome, or as a form of Loophole Abuse when they're required to punish someone they don't feel actually deserves it. Someone employing a Failure Gambit is invoking this trope as the consequences of their own failure is what they are often after; it can also overlap with Springtime for Hitler if a character intentionally tries for the Unishment and fails. It may also lead to someone being Gracefully Demoted. Not to be confused with Cool and Unusual Punishment (which is still a legitimate punishment, and it's the audience who desires to see it executed).

See also Cursed with Awesome and some cases of Infernal Paradise. A supertrope to Get into Jail Free and Desires Prison Life, in which getting into prison in pursuit of another agenda is the desired goal, and Getting Suspended Is Awesome, when a kid sees getting suspended from school as a reward because they get to stay home. Compare also Arson, Murder, and Lifesaving, when his "crimes" were actually helpful. Compare Chew-Out Fake-Out, where instead of being reprimanded the guilty party is excused or even praised. Contrast Curse That Cures (where a Curse is actually welcomed by a character because it cures them of a sickness or injury), Cruel Mercy (when the character spares another's life only for it to suffer a Fate Worse than Death) and The Not-So-Harmless Punishment (when a character's punishment is introduced as seemingly trivial but is revealed to actually be far worse than initially thought).