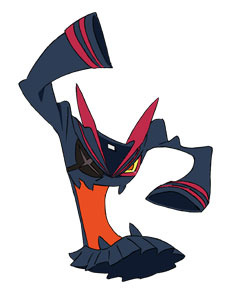 They say that Clothes Make the Superman, and every girl's crazy about a Sharp-Dressed Man, but sometimes an Iconic Outfit can literally take on a life of its own. Whether ordinary fabric brought to life by magic, futuristic technology controlled by an advanced AI, or even an actual living creature that looks and functions like an everyday school uniform, Living Clothes are more than just a bold fashion statement: they can think, communicate, and sometimes even act of their own accord.

Compare and contrast Animated Armor and Dancing Pants, which can act without a wearer but are generally non-sapient. Also compare Live Mink Coat and Feather Boa Constrictor, where more mundane living creatures are pressed into service as clothing. Can overlap with Equippable Ally, if the ally in question turns into an outfit of some kind; and Bio-Armor, if the clothes are a biological organism in themselves.

Hexside used to have a special hat to sort the students into the coven tracks of choice, but it started eating them alive instead.

Hexside used to have a special hat to sort the students into the coven tracks of choice, but it started eating them alive instead.