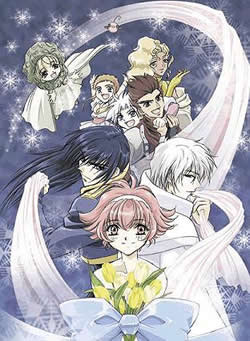 Himeno and her Unwanted Harem.
"We have to find her soon, the one who will turn the snow white."
Advertisement:

Shin Shirayuki-hime Densetsu Puriitia — "Prétear: The New Legend of Snow-White", often shortened to just Prétear — is a Shōjo story with a premise that can be described as "Magical Girl Warrior Snow White And The Seven Pretty Boys". Originally a four-volume manga created by Jun'ichi Sato (best known as the director of the Sailor Moon and Princess Tutu anime series) and Kaori Naruse, it was adapted into a thirteen-episode anime series, with some noticeable changes in the plot and character designs; both the manga and the anime were licensed by ADV; the anime is now licensed by Funimation.

The story revolves around sixteen-year-old Himeno Awayuki, who finds herself in a situation like in "Cinderella": several years after her mother's death, her father Kaoru married the rich widow Natsue who has two daughters, neither of whom seem to like Himeno. Unable to fit into this new environment, Himeno gets more and more depressed, even starting to think that it would be better if she disappeared from the world... that is, until she stumbles upon seven magical boys who call themselves the Léafe Knights. They are searching for a girl who can accept their Elemental Powers and become a Magical Girl Warrior named "Prétear" who will save the world from Fenrir, the Princess of Disaster.

Interestingly Pretear seems to be Junichi Sato's prototype run for his work on Princess Tutu. Both have plucky red-haired magical girl heroines(Himeno, Ahiru/Duck) Both involve an initially hostile and jerky dark-haired guy who become a love interest( Hayate, Fakir) Both have a white haired male ally turn evil for the love of a dark princess( Sasame and Fenrir, Mytho/Siegfried and Rue/ Krahe.) Both involve Fairy tale and Magical Girl elements.

Not to be confused with the Pretty Cure franchise.