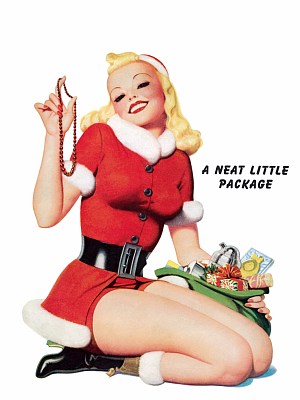 Gives a whole new meaning to "Ho ho ho".
"You're supposed to be Santa's wife, not his mistress!"
— Geneva, Hangin' with Mr. Cooper
Advertisement:

A sexy dress designed to make it clear it's to be worn for Christmas time. The outfit is usually red, and trimmed with either fur (real or fake) or with feathers, often topped by a Santa hat. The exact form of the dress can vary:

Since these are either skimpy and/or skintight, these outfits are major Fanservice. Shows will often have a Mall Santa with one or more ladies wearing this, whether or not it happens in Real Life. A variation of this is the girls wearing sexy elf costumes.

Expect someone to make an obligatory joke about the character being Exposed to the Elements.

A Sister Trope to Happy Holidays Dress (the one with the longer skirt, and is, therefore, warmer), Minidress of Power.

This is about the dress, not just any kind of Christmas fanservice.