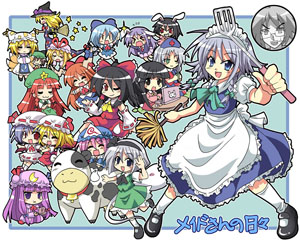 Life of Maid (Maid-san No Hibi) is a Touhou Project Slice of Life 4koma series from a doujinshi artist by the name of colonel_aki. This series stars the cast of the Scarlet Devil Mansion and their friends in the Magical Land of Gensokyo. For the most part, "speech" is expressed through images (while many strips are completely silent), with only a few background signs, and the humor is character- rather than pun-based, making the series "translate" well.

Can be accessed here

(artist's personal blog, Thai). Note that Danbooru links, as always, are potentially NSFW due to ads.

The daily lives of the Scarlet Devil Mansion residence features examples of: