Video Game / House of the Dead 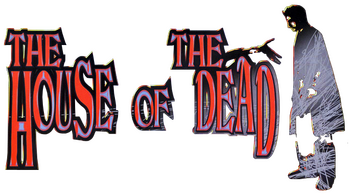 They've come for brains. You'll give them... bullets.
Advertisement:

A series of arcade light gun games starring finely dressed federal agents mowing down armies of zombies. Every game's story boils down to:

1) Zombies are being untidy and making an administrative burden of themselves.
2) Sharp-dressed agents of the AMS arrive and resolve to stop the crisis.
3) The villain will mention something about Humans Are Bastards and set out to remake the world on their own image.
4) But it doesn't matter to the protagonists because they just shoot up whatever man-made monstrosity they throw at mankind!

However, if you still feel more intricate details are needed, we've a page for that.

The House of the Dead series is known for its fast-paced gameplay, Multiple Endings, branching paths through levels, high difficulty, and laughable voice acting. Unlike most depictions, the zombies here are fast, wield weapons and supernatural powers, drive cars, or are very fat. Bosses often take the form of some freakish abomination, most of them named after Tarot cards.

You're in for a blood-soaked ride... just don't expect a gripping story, nuanced characters, or some kind of social messagenote Although the games do love talking about the impact humanity has on the world. These games are in their element when it comes to sheer dumb fun.

The main games in the series are as follows:

There are likewise spin-off games as well:

The series has had ports over its run; the original game was ported over to Sega Saturn; 2 got ported to the Sega Dreamcast, and III was ported on the original Xbox* (next to Silent Scope, the only light-gun games for the system). All three of these games also had ports on Windows PC. The second and third games in the series later got a Compilation Re Release in 2008 for the Wii in The House of Dead 2 & 3 Return while III and 4 got re-released as downloadable games on the Play Station Network in 2012.

I have made an example list to rule over man kind!:

Alternative Title(s): The House Of The Dead, Curien Mansion