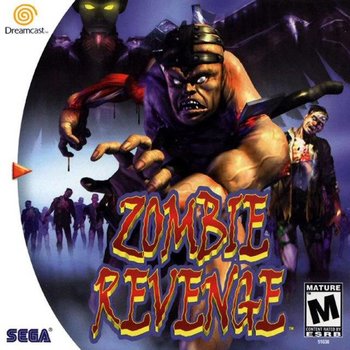 Zombie Revenge is an arcade Beat 'em Up from Sega released in 1999 and a spin-off of the House of the Dead series.

It features the same...creative approach to English and voice-acting as its parent franchise, and follows three government agents: the hilariously-named Stick Breitling, the uber-masculine Rikuya Busujima, and the comparatively-normal Linda Rotta. Their eventual mission is stopping "ZED", a mysterious yellow-eyed man who claims responsibility for the zombie outbreak. It is an unapologetic quarter-muncher where players can fight the undead with their guns, their fists, or a wide variety of other weapons including flamethrowers, drills, and rocket launchers.

Rikiya Busujima, in his alternate fedora costume, reappeared years later as one of Sega's representatives in the 3DS crossover Project X Zone.