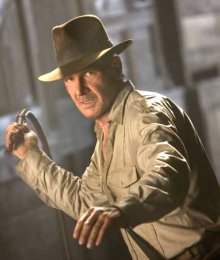 If adventure has a hat, it must be Indiana Jones'.
"For the heroes, even the fedora, jacket, and khakis were common attire."
— James Rolfe in the intro to the top 10 dumbest Indiana Jones moments

For some Action Heroes, a fedora is just the kind of hat to wear while in a Fight Scene, Chase Scene, or just doing anything badass.

In some of the adventure Film Serials, the fedora would be worn by the hero, usually as a means of hiding his face when played by a Stunt Double. When Indiana Jones came along, it solidified the hat as a sign of the adventurer (at least to modern audiences). It can also become an Iconic Item. Another function the fedora serves is that it gives the hero a distinctive silhouette.

Just be careful not to confuse a trilby (a hat with a similar arc, but a short, curled brim around the perimeter and made from sewn fabric rather than shaped felt) for a fedora.

A fedora is also one of the most common hats used in a Coat, Hat, Mask outfit.

Important: This is not just any protagonist wearing a fedora. There has to be an action element.

A Sister Trope to Adventurer Outfit, Scarf of Asskicking.