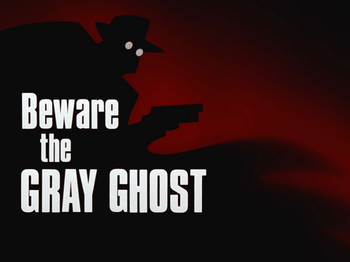 The episode begins with an episode of The Gray Ghost, a television series Bruce watched as a boy. In this particular episode ("The Mad Bomber") a series of bombings rock the city, with a ransom of a million dollars demanded to prevent future attacks.

Cut to present day Gotham, where a series of bombings rock the city, with a ransom of a million dollars demanded to prevent future attacks. Batman realizes that the bombings are the same as the ones in The Gray Ghost, but since he cannot remember exactly how they happened (as he fell asleep before the episode was over), he begins to investigate what the connection is.

His attempts to locate the old episode fails, as he learns the studio behind it burned down in a fire that also destroyed the entire Gray Ghost archive. He instead tracks down the show's main actor, Simon Trent, who is now a broke recluse who cannot find work since the role typecast him for life. In fact, he's just had to sell off almost all his remaining Gray Ghost memorabilia to toy collector Ted Dymer just to pay the rent.

Batman buys the merchandise and returns it to Trent's apartment as a goodwill gesture, along with a note to meet. When Trent realizes it's the Dark Knight looking for him, he's understandably nervous, but agrees. No sooner do they meet than another bombing strikes Gotham, with Trent taking the opportunity to flee. Batman is not deterred, however, and waits for Trent at his apartment. Angry at being stalked, Trent threatens to call the police, but Batman believes Trent knows something about the bombings and convinces him to help. Trent reveals he has film reels of all of the old show episodes and reluctantly gives "The Mad Bomber" to Batman, before telling him to leave him alone.

Bruce watches the film Trent gave him, with fond memories of watching The Gray Ghost with his father. Watching the "Mad Bomber" episode, he discovers toy RC cars delivered the bombs, something Bruce finds unbelievable. Nonetheless, Batman calls Commissioner Gordon with the information, who positions police and SWAT outside Gotham Library, the next bomb target.

Sure enough, the toy cars appear. The first one is sniped. Batman takes out the second with a flamethrower, but the third escapes. Batman chases it down but finds it was only a decoy. More bomb-cars are sent after Batman, but someone drops a rope for him to escape: it's Simon Trent, dressed as the Gray Ghost. Batman shows him the toy car and asks for his help in investigating. Intrigued, Trent agrees.

Trent is taken to the Batcave, which leaves him in awe, as it is modeled after the Gray Ghost's lair. Batman had in fact used him as an influence, and shows Trent the memorabilia he has collected in a shrine. The computer picks up fingerprints on the toy car belonging to Simon Trent, but he denies being involved. Under interrogation he realizes that Ted Dymer, to whom he'd sold some of his toy cars earlier, must be the Mad Bomber.

Batman confronts the collector. He reveals he turned to crime to fund his toy collecting, and sets more bombs after Batman. Trent smashes through a window and knocks Dymer into a bookshelf, which causes the toy shop to catch fire and explode. Batman saves him, before he breaks down in front of Batman and Trent over losing his precious toys.

When the incident hits the papers, the Gray Ghost hailed as a hero for assisting Batman in capturing the Mad Bomber. Trent is filled with new purpose at his revitalized image; he also hands over his film reels of The Gray Ghost to be published to video, restoring his income and career. At a later signing event, Bruce asks Trent for his autograph and hints that he is really Batman.